I am not sure when I first thought about putting content of mine on the internet but it wasn’t until around January, 2010 when I actually started doing something. I started uploading pictures to my Flickr account (flickr.com/charleshuss) that I had since 2008.

Around that time I had a few ideas in my head for t-shirt designs, bumper stickers etc., but I had no real outlet for them. Then came the oil spill in the Gulf when I designed a shirt that said “Free Oil, You Pick Up. Call BP for details.” 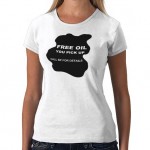 I had a good design but it was time sensitive and I had no outlet for selling it and I didn’t want to put out a bunch of money up front to have it printed. Eventually I discovered sites like Cafe Press, Printfection, and Zazzle, that do print-on-demand services. I decided to build a store on Zazzle and called it Working Cat Studios, but by then it was around August and the Free Oil shirt had passed its prime. 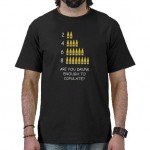 Even so, I kept adding content for a while until we moved back to Florida a few months later. After that I had other things going on and my designs slowed down. Eventually money started trickling in at the rate of about five dollars a month, which was another reason the designs slowed down. I haven’t given up on it though because I think there is potential and because I enjoy doing it. I just recently added another design which is a good example of my crude sense of humor.

Sometime around May of this year a rooster showed up on the property that my wife, Rose, manages. I took pictures of him and put them Flickr where the marketing director of Rose’s company saw them and suggested she start a blog about “Rocky Rooster.” Of course, that job was passed on to me, but I was reluctant at first because I had no idea what to write about.

I jumped in anyway because I wanted to help but I did not know which blogging platform would be best. I knew about Blogger, WordPress and Typepad and eventually chose a free account on Blogger, simply because my son, Chris, had experience with it and I thought he could help me if I needed it.

Rocky Rooster was taken so I started RomeoRooster.blogspot.com. I thought Romeo was appropriate because he seemed like a ladies man, so to speak. I decided it would be better if I blogged as Romeo himself and just to add a little humor to it, I made him a bit arrogant, or “cocky” might be a better word. I had fun doing the blog and even though I knew I enjoyed writing, I somewhat rediscovered that fact.

I then decided to start writing about our cat Chris who is the most troublesome cat I have ever seen but he is also very funny and loveable. This time I put it on wordpress.com (which I like better) and bought the domain BadCatChris.com.

Shortly after that I bought a recumbent bike because I wanted to start riding to work but didn’t want to ride ten miles on my old bike because I was afraid my back wouldn’t like it. As a way to motivate me to actually use the bike I started a blog about that too at newlybent.wordpress.com.

Recently I discovered that I could upgrade my hosting plan at godaddy.com and get hosting for unlimited domains. That prompted me to get this website and another on about minimalism called beaminimalist.com. It is a subject that interested me for awhile and one that I have experience with after moving four times in five years. Rose and I want to someday live on a boat so I have been downsizing to make that transition a smooth one when it actually happens, which won’t be for awhile, but you can never be too prepared.

For now, I think, I have bitten off more than I can chew, but if I ever find myself with more free time I may start another blog.