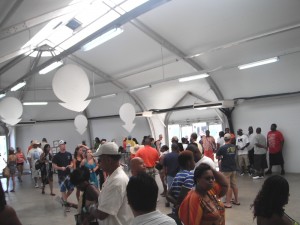 We arrived in Ocho Rios, Jamaica on the morning of the second full day of  our cruise on the Carnival Destiny. We bought an excursion to Paradise Beach and after waiting in a hot tent for ten minutes, we got in a big van and traveled less than a mile to the beach. It was so close, it would have taken less time to just walk there.

We chose the beach because Rose didn’t want to go to the falls and since we are going snorkeling in Grand Cayman, we did not want to do it in Jamaica too. Unfortunately, we did not do our research like we usually do and had to choose something the ship offered. 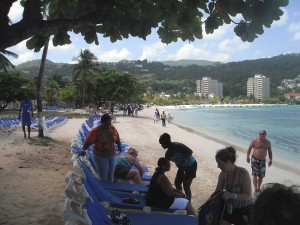 I mentioned we could walk there but I don’t think we would have been allowed on the beach. There were security guards at the entrance and when we arrived we were escorted to our little section, which was maybe 400 feet long. One side had a resort with a no trespassing sign, I’m not sure what was on the other side besides jet ski rentals and security guards.

I think the entire beach is controlled by private companies, including Carnival. I suppose living so close to the beautiful Gulf beaches of Florida has spoiled us but we both thought Paradise Beach was an inappropriate name, this beach was far from paradise. It should have been called Mediocre Beach. It certainly was not worth the $50 apiece we spent to go there. 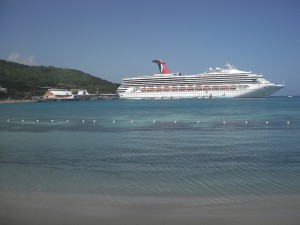 The description talked about walking on  a beautiful white sands beach while you look for shells. Well the sand was not very white, there was not a shell in sight and if you wanted to take a walk you would have to turn around a lot. There was also a large amount of seaweed in the water and you could only go out about wast deep before running into the ropes.

We left there after about two hours and got a ride the stores. We could have walked there too but we were warned that the locals would accost you for money. We shopped for about twenty minutes and Rose bought gifts for everyone on her list.

Afterwards we waited for the ride back to the ship. After ten or fifteen minutes, no ride showed up so we decided to walk. We did get asked for money a couple of times but it was no big deal. It was worse inside the stores where the merchants followed us around and tried to push everything we looked at. It was very annoying.

It was a very controlled environment. We felt like we were allowed out on a day trip from the asylum. Jamaica may be a great place to visit but unless you know what you are doing, don’t go there on a carnival cruise.